Residents were asked to contribute objects and written material for an ark which is buried for 100 years. The ark contains their secrets, aspirations and communications to the future which included letters to descendants. Young children painted their own visions of the future. The local Youth Club chose contemporary objects to be included and made a film about themselves.

The site of the hidden treasure is marked with a sculpture of a giant key. Nearby a small monolith has a viewing hole which aligns the key with the church tower and in the church tower there is a box containing the key to the underground chamber. Dates on the key would suggest that the treasure be opened in 100 years’ time.

The opening night was a huge community celebration involving a public performance of the sculpture being craned on site with lights, music, fireworks and a laser which showed the sight path connecting the monolith, key and tower. A night to remember and as such will keep the underground myth firmly in people’s memory. 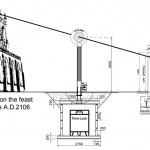 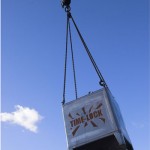 Timelock being lifted into place 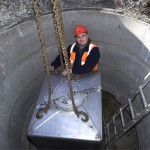 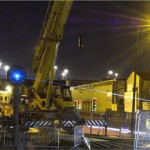